I plan to design and construct an inexpensive visible light absorption spectrometer that will be used in classrooms. A spectrophotometer is an instrument used in many science laboratories that measures the amount of light that passes through a sample at a particular wavelength. A spectrometer will be constructed using simple low-cost materials: LEGO blocks, a light emitting diode, a diffraction grating, and a photodiode detector. The instrument will be controlled using a microcomputer with open source software. The software will control the wavelength of light detected and collect/process the signal. The basic spectrometer concept will be implemented in teaching environments allowing students to understand the principles that go into commercial grade spectrometers. The low-cost spectrometer performance will be compared to that of a commercial spectrometer, to evaluate the effectiveness of the low cost instrument. Labs will be developed that utilize the spectrometer. 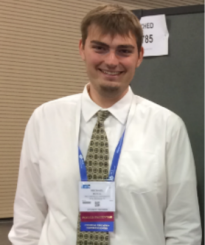 Michael Buell is a senior Chemistry major at Millersville University.  The goal of his independent research project, under the guidance of Dr. Daniel Albert, was to build and implement a LEGO spectrometer and share the findings at his Chemistry Senior Seminar, Made in Millersville and the American Chemical Society (ACS) National Conference in San Francisco in April of 2017. Funds were utilized for the construction of the spectrometer, development of labs, and travel costs associated with attending the national conference. Conference attendance will allow him to share his research and listen to fellow scientist present their research to the scientific community.  The national conference will also allow him to meet new people and to build a network of peers in his field. After graduating from Millersville, Mike plans on starting his career in the chemistry field.